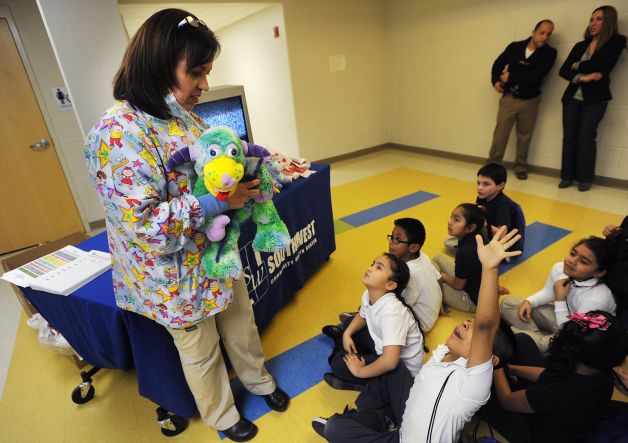 The 7-year-old, a second-grader at Roosevelt School, said she usually sees a dentist at least once a year. But when a pair of dental hygienists from Southwest Community Health Center in Bridgeport stopped by her school Monday to give free dental check-ups, Keishla was one of nearly 250 kids who opened wide.

"They checked my teeth and looked in my mouth," she said. "They told me to brush every day."

The school hosted the free dental screenings as part of the Give Kids a Smile program, a national effort to provide dental services to underserved children. Each year, about 350,000 children benefit from screenings, treatment and education provided through the program.

Roosevelt's screening was provided through its school-based health center, a collaboration of the state Board of Education, Southwest Community Health Center and Optimus Health Care. Optimus and Southwest are federally qualified health centers that provide affordable health care to the uninsured and underinsured.

Staff members from Southwest were on hand throughout the day at Roosevelt, checking children in kindergarten through third grade for tooth decay, teaching them good brushing habits, and handing out "goodie bags" filled with toothbrushes and other dental tools. The goal was to figure out which children weren't regularly seeing a dentist, and which ones might have tooth decay and other problems requiring follow-up care, said Samuel Diaz III, community relations coordinator at Southwest.

"We want to try and teach healthy habits a little early," he said.

If children had a problem that needed serious dental attention, parents were contacted and put in touch with a dentist -- either through Southwest or another provider, depending on whether the family is insured and what they can afford.

A lack of proper dental care among children is a concern in Connecticut and nationwide. According to the state Department of Public Health, about 40 percent of children in the state have experienced dental decay by the third grade, and about 12 percent of that was untreated. Nationwide, the Centers for Disease Control and Prevention reported that between 2006 and 2010, nearly 16 percent of children age 6 to 19 had untreated tooth decay.

Part of the problem is access to proper dental care, particularly among low-income families. According to the state, in 2013 nearly half of Connecticut adults living in households with annual incomes below $15,000 reported not seeing a dentist in the past year.

That can trickle down to children as well, said Melinda Stygles, who teaches bilingual second grade at Roosevelt.

"Some parents need a little more encouragement" when it comes to their children's dental health, she said. "If a child complains about their teeth to me, I will usually tell a parent. If they don't have insurance, I will work with them to figure out where they should go."

Many of the children who were examined Monday morning didn't have serious dental problems, said Aida Cruz, dental hygienist with Southwest. But a handful had obvious dental decay or other problems needing follow-up care.

"I came across one kid who has big problems," Cruz said, explaining that the 7-year-old child had cavities on his first-year molars. The teeth will likely have to be pulled, and Cruz said Southwest can refer the boy and his family to a dentist who can treat the problem at an affordable rate.

Some of the issues spotted by Southwest's staff are easier to fix, Diaz said. He mentioned that one child had contracted strep throat four times in quick succession. It turned out that the children in the house were sharing the same toothbrush.

What's going on in the mouth can influence overall health. That's true of both adults and children, said Lamouy Anglin, one of the Southwest dental hygienists who participated in the Roosevelt screening. Among adults, poor dental health can indicate diabetes, heart disease and other problems. With children, the concerns are different, but equally serious.

"Kids with asthma tend to have more inflammation in their mouths," Anglin said. "And with kids with poor diets, we're going to see more swelling and dental decay."